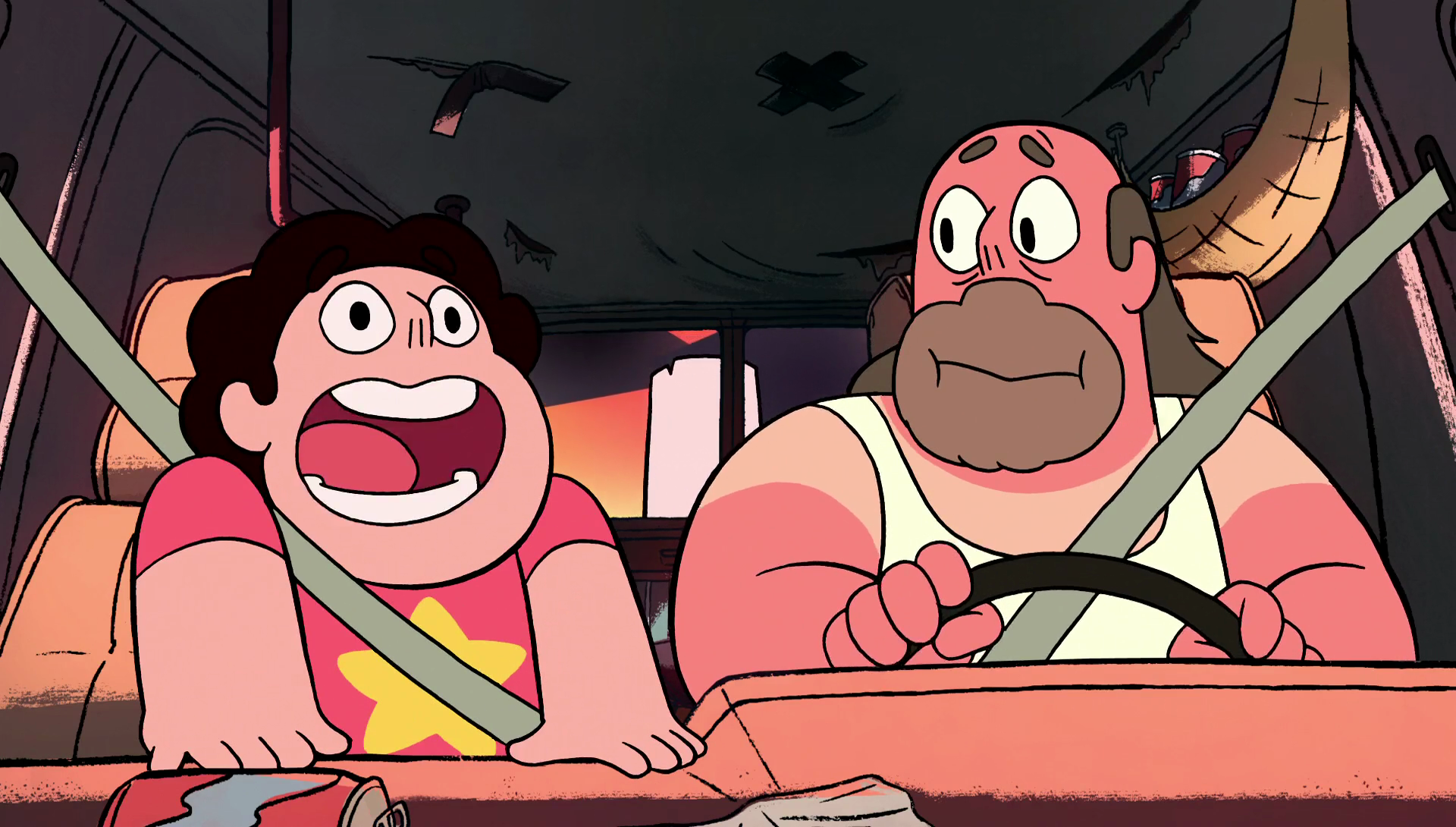 If you are watching Steven Universe for the first time as you’re reading these, you’ll likely notice me assigning meaning and depth to things that you, an initial viewer, might not give a second glance. This episode in particular sets forth a very important philosophical argument that will be relevant to the series time and time again — but it does it very subtly, and couches it in the goofy, childlike tone prevalent in these early Season 1 episodes. As a result, there are definitely moments in this essay where you’ll be like “Dude. . . what are you doing? This is a kids’ show. There’s really not that much to it; what is even happening right now.”

But I assure you, the creators of Steven Universe are playing a very long game, my friend, and appearances can be deceiving. This is gonna be a fun one; let’s get into it.

As Steven and Amethyst are spending an afternoon tooling around on the boardwalk, a menacing orange sphere, which looks like a glaring eye and shines ominously, approaches Beach City from the sky. The Crystal Gems congregate on the beach to brainstorm how to stop it, and Garnet mentions that the only thing powerful enough to destroy the sphere (called a Red Eye) is a light cannon that once belonged to Rose Quartz, Steven’s mother. However, Rose Quartz is gone, along with her cannon. Steven offers to go and see his dad, Greg, to see if he might have the light cannon. The gems, skeptical, stay on the beach to brainstorm other ways to defeat the Red Eye.

Greg lives in a colorful van, parked next to the local car wash. Steven arrives and wakes him up, and Greg emerges from the van in an undershirt and sweatpants, disoriented from his nap. After some delightful and adorable dialogue that establishes their loving father-son relationship, they head to Greg’s storage unit to see if the light cannon might be in there. The storage unit is overstuffed and filled with junk, but after a bit of spelunking Steven locates the light cannon at the very back. Perhaps a tad ungracefully, Steven and Greg use the van to tow the light cannon to the beach — and just in time, as the Red Eye has come close enough to start causing some disastrous gravity anomalies. The group panics when they realize they don’t know how to activate the cannon, but discover on accident that Rose programmed it to only respond to Greg’s old catchphrase: “If every porkchop were perfect, we wouldn’t have hot dogs.” In a beautiful pyrotechnics display, the light cannon destroys the Red Eye, and the day is saved.

This second episode continues the first episode’s work of slowly building the world and laying down backstory – if you were confused at the whereabouts of Steven’s biological parents in “Gem Glow,” here’s your answer. We also get the story of how Greg and Rose met (he was a traveling musician, and when he played a concert in Beach City, Rose was the only one who showed up), as well as our first glimpse of Rose in the form of a framed photo of her and Greg that Steven encounters in the storage unit.

Perhaps most importantly, we get a very brief explanation as to why Rose Quartz no longer exists:

GREG: And we were always together after that. Until she gave up her physical form to have you.

We’re not really sure what this means yet, but again, I enjoy the slow leak of information.

“Laser Light Cannon” also introduces us to Greg, an important and central character throughout the series. Right from the get-go, Greg’s purpose seems to be to upend some of our preconceived notions about class, wealth, and success. The gems are a little disdainful of him:

PEARL: Greg is. . . nice, Steven, but I doubt Rose would trust someone like him with such a powerful weapon.

AMETHYST: Your dad is kind of a mess, Steven.

AMETHYST: I’m just saying! Even if she did leave it with him, he probably broke it, or lost it, or dropped it in the ocean by now.

And in the scene where we first see him, he is clearly supposed to be extremely schlubby. He lives in a van, works at a car wash, is napping in the early evening, and seems to have a permanent t-shirt tan that his tank top does a poor job of hiding. He’s pretty unkempt, with long hair and a beard. He also has a pronounced hoarding tendency, as evidenced by his practically labyrinthine storage unit.

But despite all this, Greg seems perfectly. . . happy. The traditional markers of success don’t seem to mean much to either him or Steven — rather, they are both content to simply hang out with each other and have a great time. And, you know, save the world. The episode goes out of its way to point out that the things that society tells us we need aren’t always necessary for happiness or fulfillment. And it does this by creating an endearing, loving dynamic between Steven and Greg that is just endless fun to watch. Steven’s unwavering support of his dad’s music, and the goofy little bopping up-and-down dance he does to “Let Me Drive My Van Into Your Heart,” never fail to give me the warm fuzzies when I watch this episode.

Perhaps most importantly, this episode gives us the first use of Greg’s signature catchphrase, which might be as close to a concise philosophical summary of Steven Universe as we get: “If every pork chop were perfect, we wouldn’t have hot dogs.”

Put more literally: if you expect perfection from every aspect of a process, you will miss out on a world of delicious opportunities. Even more literally: if all you care about is things going the way you want, not only will you be disappointed, but you’ll be denying a fundamental truth of the human experience, and you won’t have any fun. This philosophy is backed up by the lyrics to Greg’s song:

I know I’m not that tall;

I know I’m not that smart.

But let me drive my van into your heart,

Let me drive my van into your heart.

And if we look out of place,

I’ll drive us into outer space

Where we can’t hear what people say.

I know I don’t have a plan;

I’m working on that part.

At least I’ve got a van,

So let me drive my van into your heart!

Let me drive my van into your heart!

I think you can interpret this song in a number of ways: on the surface, it is clearly Greg speaking to Rose, but I think it could also be Rose speaking metaphorically to her fellow Crystal Gems (I can’t expand on that assertion right now, but we’ll come back to it). Alternatively, it could be the show speaking to us, the audience, telling us to embrace our own imperfections.

It is no coincidence that Rose made the phrase “If every pork chop were perfect, we wouldn’t have hot dogs” the command to unlock her laser light cannon. Metaphorically, embracing imperfection here is the key to unlocking one’s own power. And it’s also not a mistake that the cannon responds to a human phrase, about a human subject, and comes from a human storage unit. Remember, the Gems didn’t bother to look for the cannon, out of a lack of faith in Greg. But Steven has ties to both the Gems, who can fight the Red Eye, and his dad, who has the equipment to defeat it. This won’t be the last example of Steven’s two halves uniting to solve a problem.

Lastly, what does the Red Eye represent? Unlike the Centipeetle that the Gems fought last episode, it doesn’t seem particularly animalistic. Rather than attack, it simply looms ominously over Beach City, looking down on the humans and Gems below. Could this perhaps be a reference to The Great Gatsby, in which a billboard portraying the eyes of Dr. T. J. Eckleburg looms over the Valley Ashes, as if God is passing judgment over the events of the book?

I can’t say for sure, but I think we’re on the right track thinking of the Red Eye as an artificial, unfeeling, surveying presence. Believe it or not, we will hear about the Red Eye once more in a future episode. I missed it on my first few watches of the series; it’s a very subtle detail.

“Laser Light Cannon” feels like a significant step forward. It still has that childlike tone common to early episodes, but the animation and storytelling already feel much more confident; the sequence of the firing of the laser light cannon is absolutely gorgeous. I particularly love the things this episode does with color, as the creepy reddish-orange glow of the Red Eye slowly infiltrates Beach City over the course of the eleven-minute runtime. The comedic beats of the show are also making progress; Steven’s aforementioned dance in the van is of course hilarious, but I love love love the image of quiet, powerful Garnet picking up scrappy Amethyst and just freakin’ launching her at the Red Eye like a dodgeball. Followed, of course, by Amethyst’s anticlimactic plunge into the ocean, and her cheerful “I’m alright!”

This episode isn’t necessarily a favorite of mine; despite being ripe for analysis, the interesting stuff is mostly below the surface. As a result, it’s not the best episode to convince new viewers to keep watching, as the emotional engagement has yet to really arrive. But it’s still a rollicking good time with plenty of material to chew on, and it’s integral enough to the series that it does not warrant a SKIP.