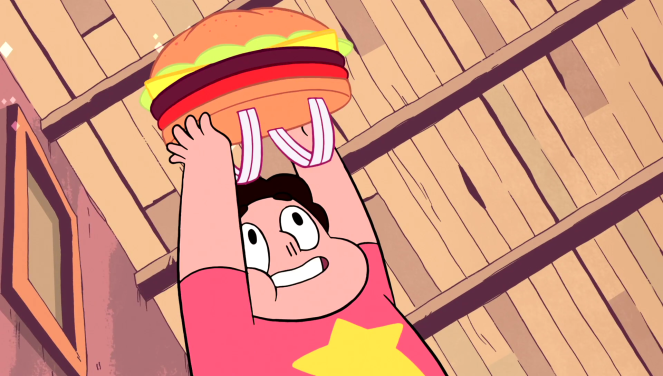 Well, here we are. It was inevitable, I suppose, that we would come to the first episode to merit a SKIP stamp from me. Now, none of this is to say that I don’t absolutely love “Cheeseburger Backpack” — it is an icon of the show and has some truly delightful moments. However, it feels a little stagnant in terms of the larger story. Still, like any Steven Universe episode, there are some interesting things to look at.

Steven sits on the beach by his mailbox (by the way, does Steven’s house even have an address? His house doesn’t appear to be by any road, but it has a mailbox, and mail carriers know where it is) as he waits expectantly for a package. Jamie the Mailman makes his first appearance and delivers Steven a novelty backpack shaped like a cheeseburger, which Steven eagerly shows to the Crystal Gems. The Gems, meanwhile, are about to embark on a mission; replace a small, magical statue on top of the Lunar Sea Spire to restore it to its former glory.

Steven begs to come along on the mission, and the Gems give him the statue to carry in his Cheeseburger Backpack. Excited, Steven packs as many potentially useful items as he can carry, and they set off.

The group arrives at the crumbling Sea Spire, and proceed to climb their way to the top. At every level, they face obstacles and challenges that might prevent their ascent — but Steven keeps pulling unexpected solutions out of his backpack: a rope of tied-together sweaters as a grappling hook, a leftover sandwich to distract the Crystal Shrimp, and so on. When the Gems reach the top of the Spire, Steven reaches into his backpack only to discover that he forgot to bring the magic statue. He attempts to use a stuffed animal instead, but it doesn’t work, and the Sea Spire collapses into the ocean. The Gems comfort Steven, telling him that he did a good job regardless, and begin the long paddle home.

This is the first time we get to see the Crystal Gems embark on an actual mission, and our first time seeing a location outside Beach City — thus far, magical phenomena have only ever infringed upon Steven’s home life. It is also the first use we see of the warp pad, a key magical device throughout the entire rest of the series — and I enjoy the little humorous touches, like Steven sticking various parts of his body outside of the warp stream, that also illuminate for us the mechanics of warp pad travel.

“Cheeseburger Backpack” is also notable for being the first episode to pull its structure directly from video game narrative conventions. The music has so far been extremely video game inspired, of course, and that theme continues here with several triumphant 8-bit fanfares every time Steven solves a problem. But here we have:

All these mechanics, plus the aquatic setting, almost take me back to playing the Freddi Fish games as a little kid. The influence of video games on Steven Universe will continue to be relevant, and I’m sure we’ll come back to it.

We also have a few small world-building touches, which this episode mostly come from clues in Pearl’s dialogue:

PEARL: Oh, Steven, you should have seen the Spire back in its heyday. It was an oasis for Gems on Earth!

PEARL (looking at the abandoned spire): It wasn’t like this a hundred years ago.

PEARL: Steven! This place is your heritage. I want you to stay and help, but you’ve really got to take this seriously. Can you do that, Steven?

From this, we can conclude a few things we didn’t know before:

Again, I enjoy the slow trickle of information.

There is one fun side note here. Ian Jones-Quartey, who co-wrote this episode with Rebecca Sugar and also served as its supervising director, also voices Mr. Queasy, Steven’s talking stuffed animal. Mr. Queasy is equipped with a voicebox that utters various catchphrases concerning gross bodily functions — which might be a connection to Jones-Quartey’s work on another cartoon, Bravest Warriors. In Season 2, Episode 9 of that show, “Dimension Garden,” the character Ian voices, Wallow, is shown in flashback as a young kid — and we see that he has a whole menagerie of talking plush toys who also dispense gross bodily humor to comedic effect. “Dimension Garden” was published on YouTube about five months after “Cheeseburger Backpack” aired on Cartoon Network, so I’m not sure what was inspired by what, but it’s certainly a fun reference either way.

Other than those few things, though, I have surprisingly little to say about this straightforward adventure episode. The central dynamic here, the one most important to the series — namely, the Gems allowing Steven to put his human creativity to the test and forgiving him when he fails — is self-explanatory. It’s entertaining, but relatively free of opportunities for analysis.

“Cheeseburger Backpack” is skippable not because it’s bad, but because it doesn’t do much to progress our understanding of Steven, the Gems, or the season’s arc. All the important information that it reveals, mentioned above, is touched upon again later on, such that a new viewer can pick them up from context clues in better episodes.

The personalities of (and dynamics between) Garnet, Amethyst and Pearl are on display here, and are delightful as usual. I particularly relate to Pearl’s type-A agonizing over how messy the Sea Spire is. Amethyst continues to be fun and scrappy, and Garnet continues to be stoic and mysterious, with a strange unmentioned ability to know what challenges lie ahead. Again, however, we’ve seen these traits before and will see them again.

In addition, this episode in particular is a good example of how the animation style takes a while to find itself in the first season. Characters and items fluctuate in size a great deal, and the way Steven’s closed eyelids are stylized is weird and unnerving. Despite some beautiful images, the visuals clearly still have a long way to go.