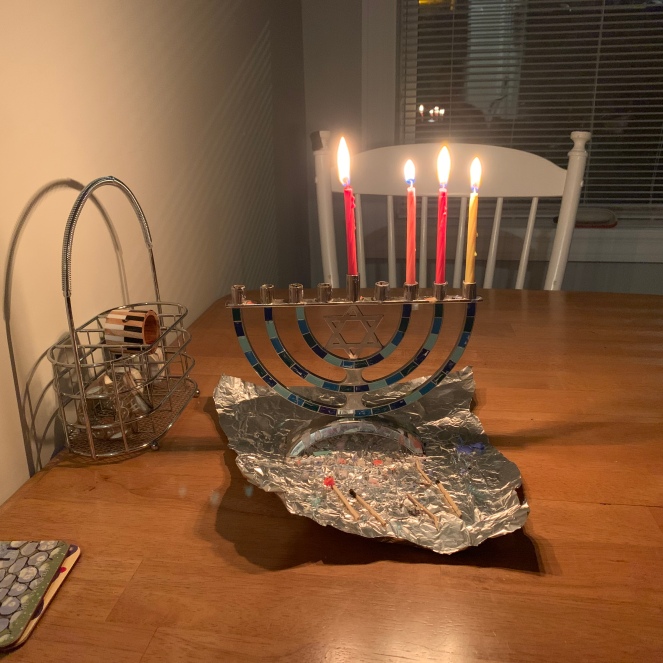 Disclaimer: There is no correct English spelling of “Channukah,” and I have made no attempt in this essay to find one. You have been warned.

My feelings about Hanukkah and its place in the “holiday season” are. . . complicated.

I grew up in an extremely WASP-y and homogenous part of southern Maine. The crowd around me, however, was mostly pretty liberal — and so the small acts of anti-Semitism that I experienced, rather than being actively oppressive, were often broadly comedic. I never got a single “My pastor says Jews are going to hell,” but I did receive plenty of “Santa got me an XBOX and a dirt bike and three Bionicles for Christmas, and you should convert to Christianity so you can get presents too.”

One time in seventh grade (I don’t remember this story but my mom loves to tell it), my homeroom teacher approached my mother, asking whether I would mind if the class had a Christmas party. My mother responded that he should ask me directly, and told him to prepare for the possibility that I might, in fact, mind. And believe it or not, when my teacher ran into my mom again, he said “I asked him and he said he minded! What am I supposed to do now?”

At which point my mom said something along the lines of “Well, you could just not have a Christmas party.” Which then presumably caused my homeroom teacher to short-circuit. I do remember that we ended up having a Christmas party — not just in homeroom, but in Every. Single. Class. The people of Kennebunk, Maine loved a good Christmas party, and neither hell nor high water was going to stop them.

This was my first brush with the fact that many goyim (a word which here means non-Jews) are quite keen on making other cultures feel “included” in this Holiday Season, but are rarely receptive when you challenge the very notion of such a season.

On the one hand, reiterating this point feels like old hat, but lots of folks still seem not to know about this, so here I go: Hanukkah is one of the minor Jewish holidays. The reason it’s the most famous is simply because of its chronological proximity to that towering December titan, Christmas. Historically, it’s more akin to Independence Day than Christmas, and gift giving on Hanukkah was not a thing until the twentieth century. Against all odds, Hanukkah has been catapulted to notoriety, to the point where it’s seemingly the only Jewish holiday many goyim know about. This is less the case today, but when I was young in Kennebunk, I heard so much “Hannukah is the Jewish Christmas, right?” and saw so many nine-candled menorahs as generic symbols for Judaism that it honestly began to grate. Hannukah itself was never the problem — it’s a delightful holiday, and Lockman family Hanukkah parties absolutely slapped — but its dominance in the non-Jewish sphere made me resentful.

The overemphasis of Hanukkah has continued to this day, of course, just in more subtle ways, and often with the best of intentions. As a theatre critic, now is the time of year when I review shows like Herschel and the Hanukkah Goblins, or Grace and the Hanukkah Miracle — kid-friendly fare that is often steeped in Jewish history. And on the one hand, these shows are glowing celebrations of our culture; an inarguable social good. On the other hand. . . well, amidst a sea of December shows that are nearly all Christmas-themed, are shows like Herschel or Grace contributing to this widespread misconception, conflating Hanukkah with Judaism? Reducing an entire culture to one holiday? I have never seen a children’s show about Passover, or Purim, or Sukkot, or Rosh Hashanah.

I don’t really have an answer for you. I guess I’d like more shows about Sukkot (objectively the BEST HOLIDAY, you can’t change my mind), but in the end, what I really want is less Christmas. Nothing makes me feel more like the token Jew than staring at the spreadsheet of Chicago shows I could review in December, and seeing a slew of Christmas media — but look! There’s the one Hanukkah show, just for me! Guess I’ll take that one! (I’ve reviewed Christmas shows in the past, but I’ve disliked most of them for obvious reasons that are usually unrelated to the production, and I’ve decided that it just isn’t fair to the Christmas show.)

A similar feeling comes over me when I see Christmas displays in lobbies of buildings, festooned with trees and baubles and tinsel — and then there’s a cute little electric menorah in the corner. Honestly, when this happens, I feel condescended to. My gut reaction to such a display is twofold:

And therein lies the problem! In my experience, goyim do not want to be told to tone it down. Christmas is the dominating force, and they’re not gonna back down one bit — but they still want to be nice to you! And if they leave you out of it, how can they feel like they’re being nice?

It’s occurred to me that I’m describing Christmas almost like an invading army. And honestly? For me and a few Jews I’ve talked to, that’s often what it feels like. If there was a War on Christmas, we have long since lost it. December is an occupied country, and the only way to survive in it is to keep your head down, not make too many waves, and pray for January.

And here’s the thing: describing this feeling? Especially to my well-meaning goyishe friends who love Christmas but want to support me anyway? It sucks. It feels like by critiquing the larger phenomenon, I’m trying to poo-poo their individual Christmas traditions, when that’s the last thing I want to do. Things like going home to see your family, creating a spirit of generosity and gift-giving, and celebrating warmth, togetherness, and light in the darkest, coldest time of the year? Those things are objectively wonderful.

I’ve talked a lot in this essay about “Christmas” and “the goyim” as a large, powerful group — and I want to be careful not to generalize. I hope this doesn’t feel like I’m attacking any individual. But in encountering these things over and over and over again, my frustration with the season has built up, and this is my attempt to describe the shape of that frustration. In all likeliness, I won’t start to hate you specifically if you think, feel, or say anything I’ve described above! It’s the cumulative effect that takes its toll. I’m not asking you to stop loving the things you love about Christmas. I am asking you to take a step back, look at it from the outside, and try to gauge how your culture is affecting the world as a whole. It’s worth doing, especially in an era when anti-Semitic violence is on the rise in America, and religious persecution in general is on the rise all over the world.

I have a confession to make. Hanukkah is the only Jewish holiday that I regularly celebrate.

It feels almost hypocritical to admit that, after railing against its overemphasis for a thousand words. But for a broke millennial such as myself — who’s not quite comfortable enough in their faith to go looking for a congregation — it’s simply the most convenient holiday. Passover requires a big, complicated dinner with lots of room and preparation. Purim, Rosh Hashanah, and Yom Kippur involve going to a synagogue. And Sukkot gets its label as the best holiday because it’s the only one that involves building a RAD FORT — and with my small apartment and smaller budget, I just don’t have the space or resources for a RAD FORT.

Hanukkah is comparatively easy. If you can afford a $10 menorah from Target, as well as a $1 box of candles (and if you want a traditional meal in a hurry, a $2.50 box of frozen latkes from Trader Joe’s and a $2 bottle of applesauce) you can afford to have a cheap, easy Hanukkah. You can light the candles and say the blessing by yourself; the party has always been optional. And in a blasphemous twist, it’s the most Instagrammable holiday as well. The simplicity and beauty of the burning candles translates well to social media.

I can rant all night about how Hanukkah’s importance is inflated and Christmas is ruining everything. But I’m a part of the system like everyone else. And I’m not at all interested in berating myself for that.

So. What do we do? How can we move forward from this?

I’m not sure. I’m talking about a small issue here, but of course nothing is as separate as we think. There are larger struggles at play here.

This morning, I tweeted a dumb joke: “I don’t believe in Christmas. I don’t think it’s real.” And all of a sudden, for the first time in my life, I seem to have attracted the attention of Twitter Nazis! Yay! Now, my mentions are full of things like “Happy Holocaust, Schlomo,” and “Say hi to Satan!” I have made liberal use of the block button today, my friends, but they keep popping up.

And furthermore, what do I do with the biting anger I’m feeling now? Do I tweet about it? Again, that’d feel like letting them win; telling them they’d got to me.

This is not metaphor; this is actually happening. And yet, I can think of no better metaphor for the state of the nation right now. How do you comport yourself with dignity when dignity — or at least the illusion of it — went out the window long ago?

Lastly, I know that for many folks, this is a time of reflection and reset. And that is something I have always liked about this particular week; how most of the world just shuts down for a few days, nobody goes to work, nothing seems real, and we all take a few moments of quiet.

Let’s try to sit in that quiet this week. And maybe, when we open our eyes, there’ll be some concrete solutions ahead of us. Fingers crossed. Thanks for reading.

2 thoughts on “On the Overemphasis of Hanukkah”